Distance Learning Definitely Isn't Driving Me Off The Edge...Yet

So we're distance learning. With a kid on chemo, there's really no other way for us to do school. Our school is awesome and proactive and is doing everything possible to keep kids safe, but we just felt like distance learning was the best option for our family.

School started the first week in August. It seemed really early to me, but they wanted to have plenty of time built in, in case they needed to take time off. My kids go to a small rural school, so even one kid getting COVID is likely to trigger a full-on lockdown, where the school needs to close down completely. While our county has been pretty lucky so far, the county just north of us has had something like ten cases in the last eight days, which doesn't seem like much, but it's more than double the amount of cases they've had in the entire six months prior to now. I feel like that's a harbinger of what we're in for down here in the coming days. Our county just had its first case at a school (although not our school), so we'll see how that plays out. 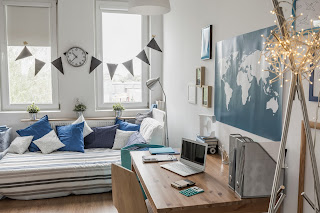 Surprisingly, distance learning has not made me crazier than I already was. Maybe it's because I actually see this as a bit of a break. When school stopped rather abruptly in March, we really didn't do much; many of our kids don't have internet, so while we had some packets sent home, there wasn't really a huge effort towards making up that lost time. The kids have pretty much been in my face since March. When school started in early August, we had spaces set up in their bedrooms where they had their Chromebooks, little desks, chairs, the works. They are actually in their rooms for several hours a day, which gives me free time to actually get work done. It's quite lovely, actually.

Let me tell you, I'm loving that quiet time. It's refreshing. By 9 in the morning, both kids are busy working on school stuff, and I usually have two full hours without interruptions. I mean, the dog still barks and needs to go outside, but I don't really count that as an interruption. I take him outside and get right back to whatever I was working on. Then again, from about 1 in the afternoon until 3, I'm free again. It's not perfect, but it's better than what I had before that time. I feel like I'm getting ten times the work done!

I know that most parents don't have it that easy. Part of my issue is that my kids are in high school and middle school. They're old enough that I don't need to be sitting over them to make sure that they get their work done. I don't need to help with math homework, which is really good. Let's face it; me helping with math would only make things worse.

My kids seem to be doing pretty well. R. is actually thriving with distance learning. No assignments are being lost. Organization is not an issue. He's not being picked on or bullied. A is also doing very well. She's able to progress at her own speed, which is good for days when she's not feeling well. She's being supported where she needs it.

How's distance learning working out for your family?