I took a nap today.

Wait, let me rephrase that. It's 1:30 in the afternoon, and I've already taken a nap today.

It's not that I lay awake at night agonizing over the shitstorm that is currently happening in our world, or in our home. It's not that I can't get comfortable despite still not having full range of motion in the arm that I broke. It's not even that it's too damn hot, although, in the last few weeks, that has definitely been a contributing factor.

It's that anxiety is a rude, thoughtless bitch, and even more so, I think, for special needs parents.

Anxiety is the voice whispering in my ear. While anxiety meds help me to be able to shut that voice up, it's rarely completely silent. Anxiety meds enable me to be able to focus on something else, instead of playing the anxiety mantra over and over in my head. But when you're trying to sleep? That's the one time you need to not be focusing on anything else. And that, dear friends, is when anxiety is the loudest.

I had anxiety before I was a special needs parent. Back then, anxiety said things like "Did you pay the gas bill?" and "Did you lock the door?" and "Hey, remember that time you sat cross-legged in a group project in sixth grade and realized an hour later that you had started your period and bled all over your jeans, which everyone probably saw?"

These days, anxiety whispers shit like "Hey, if Aria's blood clot fully occludes while she's sleeping, you won't know until you try to wake her up the next morning," and "If they switch her medication to Jakafi and you lose your insurance, it costs $13,000 per month."

Let me tell you, dear friends, that's some bullshit right there.

Both of these things are true, mind you. Thankfully, Aria's clot has resolved, but I'm pretty sure the thought about the clot occluding her vein ran through my head seventy-three times a night until she had the MRI that gave us the good news. Because of anxiety meds, I can ignore it when I'm scrolling Facebook or playing a game or watching TV, but when I'm trying to sleep? Good luck with that.

But it's more than the anxiety, for special needs parents.


One of my oldest daughter's best friends is also a special needs mom. We both understand the issues and we both run on caffeine and sarcasm. Our kids are seen at the same hospital, and we've been trying to get together for a coffee date for over a year now. And neither of us have been able to get our shit together enough to make it happen. Because there's so much to do and never enough time to do it and oh my god I am already fucking tired.

But it's not just a physical exhaustion. 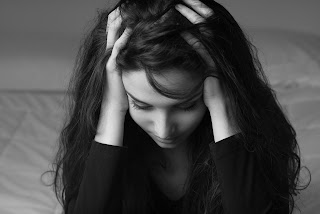 It's an exhaustion that resides deep down in my soul. I don't have physical energy, but I'm also pretty low on emotional energy.

Did you know that the divorce rate among special needs parents is higher than among parents without kids with health or neurological or emotional problems? I'm not surprised. At the end of the day, my husband and I barely have the emotional energy left to be nice to each other, much less make any kind of intimate connection. When our kids were younger, I always looked forward to this time, when the older kids would be out of the house and the younger kids would be moody teenagers, often locked in their rooms for days at a time, not wanting to spend any time with us. Then, I thought, the husband and I would be able to hang out together, watching the shows we never got to watch when the kids were little, have inside jokes, and not fall asleep before the good scenes happened.

But that's not the way things happened. For a long time, we were a tag team. I would be home, working when I could, juggling the kids and the house, helping manage therapies and headaches and bleeding episodes, and whatever else. He would come home from work and usually help out for a while, and we would fall asleep in a pile of arms and legs in co-sleeping bliss. But in some ways, it's gotten harder as the kids have gotten older, instead of easier.

Gone are the days where he walks in the door and I feel like I can get a break, or any kind of real help, with the kids. He's given all he's got to get through another day at a job he truly hates, but can't quit, because there's not another job nearby where we would get the type of insurance we need. Some nights, he doesn't even come home. He's the Chief of our local volunteer fire department. That creates, for him, an escape from the realities that having two chronically ill children. He has several trainings a month, and calls keep him busy a few nights a week. I don't fault him for that. God knows I spend enough time gaming to make up for any time he takes away from the house! We just don't have the emotional energy for each other. It's easier for us to take our minds off of our current situation with distractions.

A few months back, the owner of a local restaurant offered us dinner. We spent hours at the restaurant, eating, playing games, and laughing together. It was a much-needed chance to have some fun time together without needing to rush. But those kinds of opportunities are few and far between. We try to take the opportunity to eat out when we go to doctor's appointments, but we're often rushing to and from, so rarely do we have the time to linger over a meal. And because we eat out when we go to doctor's appointments, we don't often do so when we're home.

I know it sounds like I'm just on a big whining binge. Maybe I am.