It seems like I think about grief a lot this time of year.

It starts in late August, the lead up to my mom's birthday, which is in early September. It continues through until about mid November, which is the anniversary of my dad's death. I'm not sure if it dissipates after that, or if I just get so caught up in the holiday prep that I'm able to push it far enough back that it doesn't bother me quite so much.

As usual, there's a lot on my mind. I've been thinking about things with my mom a lot lately. I remember when I went to college, and she moved without telling me where. I remember being told that she had moved, and that she had left all of my stuff in the old house. I borrowed money from my mother in law to get a U-haul and go get my stuff. I drove around for hours with my grandfather, trying to find the new house. I remember the thought process I had at the time.

'I know she would have told me eventually. She just forgot.'

'Surely there's been some mistake.'

In the few years before her death, my mom and I didn't talk a lot. She had been pushing me to make some decisions, and I wasn't ready. The outcome wasn't what she wanted, and she stopped talking to me. As life happens when you have a houseful of kids, I really didn't notice it much.

In 2015, I texted to wish her a happy Thanksgiving. I didn't get a reply, but I didn't think much of it. Maybe she was spending the day with friends, or was resting on an extra day off.

On Christmas, I texted again. This time, I got a reply. In Spanish. Someone else had my mom's number.

I pushed it out of my head until three weeks later, when my son had his first tonic clonic seizure. Suddenly, I really needed my mom. Not only did I need support, but I needed some pretty detailed family medical history. I called the number, and reached someone who didn't speak English. In my stumbling, halting Spanish, the gist of what I got from them was that they had had that number for months.

As I sat there on the edge of my bed, the room spinning around me, I finally realized the enormity of it.

My mom had changed her phone number and not told me.

I hadn't really thought much of it, at the time. When I didn't get an answer on Thanksgiving, or even on Christmas, when the answer was in Spanish. My life was it's normal level of crazy busy, made worse by the rush of the holidays. It wasn't until that moment of extreme need that I had forced myself to think about it, and accept it.

Truthfully, it wasn't the first or even second time my mom had moved or changed her number and not 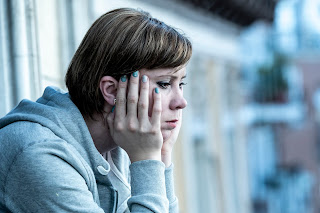 told me. It was at least the third, and probably the fifth.

It's only in the last month or so that I've really taken the time to think deeply about this. To process the fact that my mom deliberately cut herself off from me. That she just decided she was done being my mother.

As a mom of grown children myself, I don't get it.

As a daughter I want to try to make excuses for her. I want to say for years that my dad and I suspected she was bipolar. That whenever we suggested that she needed help with her mental health she would accuse us of trying to gaslight her. That we had discussed trying to have her involuntarily committed, but were pretty sure that we would be unsuccessful, and that the result would be disastrous for my younger brother. I want to say that she made the effort, a few times, to reach out to me after months of not taking to me.

But as a person who is nursing the hurt of realization, I think I'm done making excuses. I just want to be mad about it. I don't want to spend my whole live dwelling on it, but I think that being honest in your emotions is part of the healing process.

It's okay to be angry. This is something I've always told my kids. It's okay to be angry, even at me. What you need to be aware of is how you express it. You can tell me you're angry, but if you're yelling at me, I may not listen. If you slam your door, that's not okay.

Email ThisBlogThis!Share to TwitterShare to FacebookShare to Pinterest
Labels: Grief