It's been almost 13 years since my dad died. I've been thinking a lot about grief lately.

I'm not sure why my dad has been so heavy on my mind lately. Maybe it's the ongoing stream of bad news we've been getting about the kids. Or the constant feeling like I need to cry, but being unable to. Or the butterflies that I keep seeing that have what he always called "screaming yellow" on their 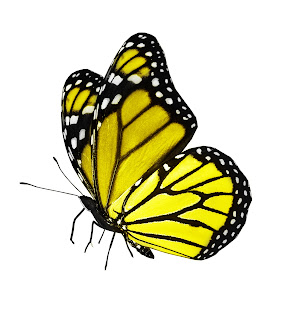 wings. It was his least favorite color, and I have zero doubt that if he were sending messages from the great beyond, screaming yellow butterflies would definitely fit his sense of irony.

I've needed my dad more in the last three years than I did in the previous ten combined. I feel like when your child is given a diagnosis of a chronic illness that will probably kill them eventually, you have this miasma of emotions. There's an underlying current of unending rage, somedays so palpable you could stab it with a knife. There's fear, and angst, and the ever-growing anxiety. Anxiety about doctors, about prescriptions, about the never-ending need for money to pay for the co-pays and the gas to and from occupational therapy and specialists visits and what are we going to have for dinner tonight and OHMYGOD did I finish that piece of work that was due?

The last few months have been some of the roughest, for some reason. A's chemotherapy dosage was raised, and she's often tired. This morning she told me that she had a hard time waking up, so she should stop playing outside after school because that makes her too tired. What kind of bullshit is that for an eleven year old to say? No, my love. You should do all of the playing with your friends outside. Nap, if you must. Go straight to bed after dinner. But in that precious time between when you come home and time for dinner? Please, for the love of all that is holy, go outside AND BE A KID. God knows you are busy with needle sticks and bone marrow biopsies and debilitating headaches. You deserve every second you get to be outside, playing with your friends and being a kid.

I also feel pretty alone, many days. I have a husband and I have a best friend and they are there, listening to me, walking with me, holding me up some days. But in the middle of the night, when my inner voice tells me to go check on the kids or that things are getting worse again or that it's just all going to shit, it would be nice to have my dad around. Somehow, he always knew what to say. He always knew how to make me laugh. He pushed me to broaden my comfort zone and take risks and to get back up when I fell.

And I fall a lot these days.

It's not that getting up is any harder to do than it was when I was younger. It's that some days there are so many goddamn things knocking me down, and I know that if my dad were here he would help me slay some of those demons.

What I have instead are screaming yellow butterflies. A backbone patiently installed, grown, and strengthened by a man who somehow knew that I would always need to be the strong one. The memory of man who loved me when I was terribly unloveable, which gave me the knowledge to know that I am worth every thing I think I am.

Some days, I just need my dad.

Email ThisBlogThis!Share to TwitterShare to FacebookShare to Pinterest
Labels: Grief

Why Family Dinner is a Priority

Over here at Embrace the Chaos, family dinner is a big thing. Like most families, we're crazy busy. At this point in our lives, we aren't a sports family, although we have been. But N. is taking college classes during her senior year, which means that she comes home later than her siblings do. The husband misses dinner several times a month due to volunteer fire department training nights. Plus we have dinner on the run often because of doctor's appointments. So making it a priority to sit down to dinner together a few evenings a week is a big deal to me.

When the kids were younger, I felt like all of my daily activities were just building up to family dinner. Finishing the breakfast dishes meant that there would be no mad dash to wash Yoda's favorite plate, and that we wouldn't run out of forks. I could chop some veggies while I cooked lunch, but I couldn't put the salad ingredients together or else the lettuce might wilt.

I have the world's smallest kitchen. We call it a "two-butt" kitchen because once you get three butts in there, someone is getting ran over or dropping something or banging a knee on a cabinet door. You walk into the kitchen and on the right side there is a cabinet, the stove, a single row of drawers, the refrigerator, then another cabinet. Then you're at the wall. On the left hand side, there's a set of double cabinets, the sink, another set of double cabinets, and a big empty space. In that big empty space goes your clothes washer, in theory.

When the kids were younger, I broke down sobbing one day as I was trying to wash all the dishes, and we had two in bottles and if you've ever had that issue, mama, let me fix you a cup of tea because it sucks, doesn't it? You have eleventy billion bottle lids, nipples, bottoms, and whatnot to keep track of. You can also guarantee that as you're washing the bottles, at least one bottle is in the possession of a little, full of milk or water. I would also lay down good money that says there's at least a bottle behind a crib, stuck between the mattress and a wall, or wedged down under couch cushions. Yeah, mama, I remember those days.

Anyway, after some sobbing, and some hysterical yelling at the husband, he decided he was fed up and went to our local rental place and picked up a portable dishwasher. You may have seen one. It's on wheels so you have to slide it over to the sink and then hook the hoses up to the faucet and you have freshly washed dishes.

But for some reason, because we had the portable dishwasher, we also had a portable clothes washer. It's been so long now that I can't remember, but there we were, fighting every day to get the dishes and the laundry done so that we could finish all of the prep that went into fixing family dinner for seven. While some of those days were frustrating, many of them were silly and filled with laughter.

As the kids got older, I had less helping hands in the kitchen. My two oldest kids played all of the sports. Even though N. doesn't play sports, she's been in that isolated teen phase since she was eight. And the littles do surely love to help in the kitchen, but now there's homework and playing outside and other priorities. 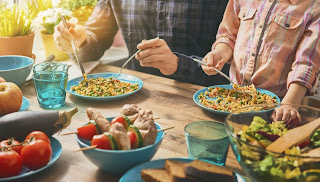 So family dinner it is. At least two nights a week, we all come together. Our tiny apartment doesn't have a real dining room, so we eat together in the living room. We may be watching Football, or a movie, or nothing at all. But it is a chance for us all to hang out together to laugh a little bit, and to make sure that we all have at least a bit of time together.

Since N. has just started her senior year, at some point in the upcoming year, we will have our last family dinner as a group of five. Just as it did with her siblings, this will make me feel bittersweet. I can't tell you how proud I am of the adults my three oldest have grown into. There just aren't enough words. But man, I hated it when they moved out of the house. With each of them, it came rushing to me way faster than I was ready for it, and I cherished all of our family dinners together.
Posted by Keisha K. Page at 2:55 PM No comments: